I’d like to tell you this story to illustrate how sometimes what seems, is not really what is.

It was 2010. At that point in my career I was an experienced nail tech, I had great clientele, I educated internationally, worked many trade shows and I was known in my circles.

One day I got an email from an emerging nail polish company out of USA asking if I would be able to help them with this project they were working on. It would involve me being live on TV for total of 1 hour demonstrating their products (just doing the nails, not talking about the product).

The pay was around $400- $450, I can’t remember. This was my first gig of this type so I asked people in the know and they all said that the price seems fair. I remember thinking holy moly, that’s a lot of money!! And it is, don’t get me wrong!

So the shoot was set up on a week day so I took time off from the salon and my clients. We needed a model but I offered to organize that because I had a friend who had nice nails, a flexible work schedule, and she didn’t mind being on TV. I promised I would take her out for dinner.
I actually organized another model for the evening because I knew that the day would be long and of course I needed a back up.
The night before the filming I did my model’s manicure because on air I would be only doing the polish applications and I packed my travel case.

In the morning I think it took me 2 hours to get ready, my friend/model arrived at my house on time.

We were to show up there a couple hours before the first segment to arrange everything etc. Then we had to be there 1 hour before each shoot because the possible schedule changes so the 1pm 15 minute segment could happen at 1:00, 1:15, 1:30 or 1:45, depending on some TV stuff.

We arrived there at 8am got to meet everyone and we went over how everything was supposed to be done. It was a fun but exhausting day. There was not enough time to do anything between the sets other than grab a quick coffee/bagel run to the nearby coffee shop after the first and the second set so we just hang out (talked, watched other things being filmed, talked more, played on our phones, slept, took some pictures) at the TV station till 4pm segment was done (at 5pm) and we went out for dinner.

I’m not complaining at all, don’t get me wrong! I’m very thankful that my career gave me so many opportunities. I got to visit so many cool places and meet fantastic people (I don’t think I would ever spend a week in Singapore if it wasn’t for nails, that was an adventure!!) or Vegas where once I was even a nail model!! But it’s also hard work and stress. The money is definitely not for nothing.
$400 a day is a lot but for a person who is employed and doesn’t have any business related expenses. At the salon I have to make $350-$400 a day in gross sales to cover all business expenses and to pay myself a modest salary…. So yeah, that is how I made $400 in 1 hour

My model days in Las Vegas 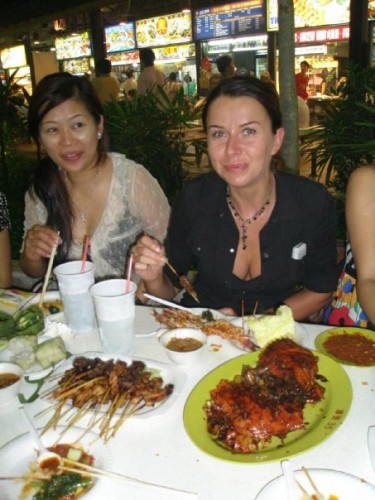 Working hard (and eating lots) in Singapore with Catherine Wong 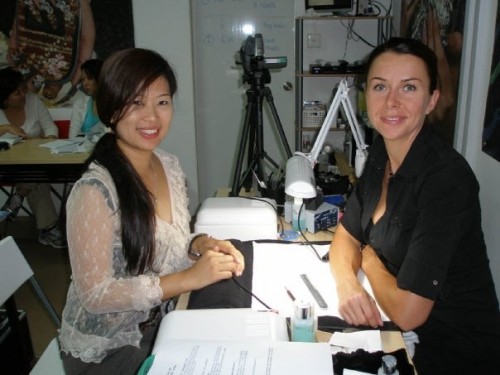 OK, better picture of Catherine and I.

About the Author: Anna

Anna Lajourdie is a world-renowned nail technician, international educator, and competition winner. She has been featured and published in an array of magazines (Beauty Cosmedica, Nailpro, Scratch, and Nails Magazine---to name a few). In addition to working with her valued clients at Polished, Anna works closely with top industry distributors and travels to beauty shows in Singapore, Poland, Spain, Germany, the US, and Malaysia to host workshops and classes, and judge nail competitions.

Do you love what you're reading? Join my email list